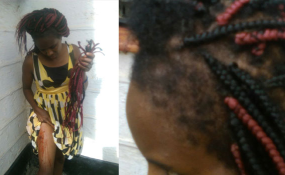 The second case concerns Biology and Agriculture teacher Mary Karimi Muhia who still has marks of assault on her thigh and head (file photo).

Nairobi — When Capital FM News responded to a cry for justice by two teachers who accuse Uhuru Secondary School Principal Juma Duncan of physical and mental torture for turning down his sexual advances, the motive was just that, to amplify their voice.

It was a tale of two teachers who had lost hope of finding justice after those they sought help from either turned sluggish or didn't do anything at all to help, despite the imminent danger to their lives.

But in a dramatic turn of events, a senior official of the Kenya Union of Post Primary Education Teachers has instead of addressing the plight of the two teachers launched a campaign, whose obvious result is to cleanse the principal and even dismissing Capital FM as a "small radio station."

It all started on Monday when the Nairobi branch Executive Secretary Moses Owiti tried to reach the reporter who exposed the horror that was being meted on the two teachers but could not get her.

Owiti eventually called the Capital FM newsroom: "I'm calling in reference to that story... " Owiti said before proceeding to dismiss the two sexual victims as "drama queens who doesn't even go to teach. You have ruined the reputation of the principal, he is married and has children."

The editor explained to him that the all parties were extensively involved before the story was published but according to Owiti, "there is no truth in it. Even the unions have investigated and there is no truth about it."

Owiti raised concerns about a threat message teacher Ancellah Cherotich Kessio had received from the principal.

"I SWEAR IN THE MIGHTY NAME OF GOD I WILL KILL YOU. YOU CNT ESCAPE, TRUST YOU ME."

According to Owiti's narrative, it is the principal who had received the threat message which he in turn forwarded to the teacher in what is a total contradiction of what he told Capital FM News during investigations.

The principal had earlier told Capital FM News that he did not know how the message left his phone to Kessio's.

Determined, Owiti then insisted on meeting the duty editor who turned down the request.

On Tuesday, Owiti called the reporter who broke the story as a follow-up of Monday's conversation at 10.26 am.

"I was calling just to make you aware that it will be necessary for you to make a follow-up so that you find if there is any development that contradicts to what you were given by the teachers who were there or can confirm... " goes part of the phone conversation.

He went on to explain that the principal's side of the story had not been told but the reporter explained that, "he (the principal) later called. When I called him first, he told me he had no comment but later on he called me when I was about to publish the story and that's when he started to talk... "

Owiti raised his voice when the reporter insisted on knowing "his interest in the story."

"Do you know what KUPPET is?" he posed.

He didn't declare his interest in the story or whether it was part of the ongoing investigations by other government agencies.

After the phone conversation, Owiti called the office to complain about the conversation which he said was not cordial.

Owiti, later on visited the office where he had a meeting with the News Editor and the reporter who did the story.

Being an official of a teachers union, which is mandated to speak the members, Owiti was very specific about his mission - to provide 'information' which would make the story, "more authentic."

He said as a result of the story, the message out in the public was two tribes were fighting against each other.

"The information that has generated in Nairobi is, Luos are fighting Kikuyus and Kalenjins, number two, men are fighting women and in Nairobi the percentage of women teachers is more than 67 per cent and thirdly, the other angle that has been generated there is that Jubilee is fighting CORD in Nairobi because of that story... as a person who is leading teachers in Nairobi I will not allow it to happen," he declared.

After he was asked to explain how political the story was he asked, "do you know the names of the people who are claiming to have been inflicted?"

The conversation was called off after it emerged that the motive of his queries was to cast doubts on the story and not providing information.

"I want to assure you that you will be really be ashamed by the end of the day... " were his parting remarks.

The Teachers Service Commission (TSC) has since started investigating claims of sexual harassment and death threats to the teachers.